Inspired by Randy Seavers’ (Not So) Wordless Wednesday post, I thought I’d share a couple of school photos of my grandfather, Vincent Lucey (20 Sep 1914-20 Sep 1976). Vinny grew up in Rochester, NH, the family lived at 75 Portland Street and he went to Rochester High School.

Here’s one from the beginning of his school career, looking thrilled to be there…

and two from senior year.

This is the tombstone of my great-grand uncle Frederick Charles Frost and his wife Nita Conner. They are buried in Section 31 at Arlington National Cemetery, to the right of the Women in Military Service Memorial. 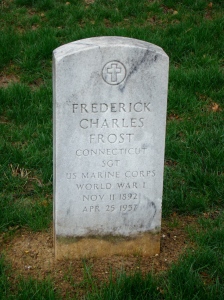 Fred was a plumber and served in the U.S. Marines Engineering Battalion, Fifth Company in that capacity. He reached the rank of Sergeant and was stationed at Quantico Marine Base in Dumfries, VA.

He was discharged honorably in Apr 1923.

Fred was born 11 Nov 1891 in New Haven, CT, the youngest child of Julius H and Susan (Odell) Frost. He married Nita in 1919 and after retiring from the Marines, they lived in Washington DC where he continued working as a plumber.

Their daughter Oritha (Rita) married Joseph H Miller around 1940. She died in Georgia in 1994. I have not been able to locate the four grandchildren mentioned.