My 2nd great-grandfather Leon Petralis (or Petrolis) is still a bit of a mystery. I have multiple documents on two events that he was involved with, his marriage and the birth of his daughter (my great-grandmother). Beyond that I have a family story about how he died, a possible death record and a potential passenger list entry from when he came to America, but those are speculative and naturally, the names aren’t all the same. I’m guessing that most people with Eastern European ancestry run into the near constant changing of names. I have so far documented 10 different names for Leon’s wife, Petrusia.

This passenger list shows a Lewen Petralis leaving Hamburg, Germany for Boston on 7 May 1889 aboard the ship Coblenz. He is a native of Rademanz, Russland, as is the passenger directly above him, Michal Aschzin who is also traveling to Boston. The dates fit both the age and arrival of Leon, but I’m not sure if this is him.

This baptismal certificate was obtained by my great-grandmother in 1952 and lists her name as M. Helen Petralis. After Leon died in the late 1890’s, Petrusia married a man who went by John Frank Smith. Helen grew up thinking he was her father and didn’t find out he wasn’t until later in life. She went by Helen Smith, but did occasionally use different last names. 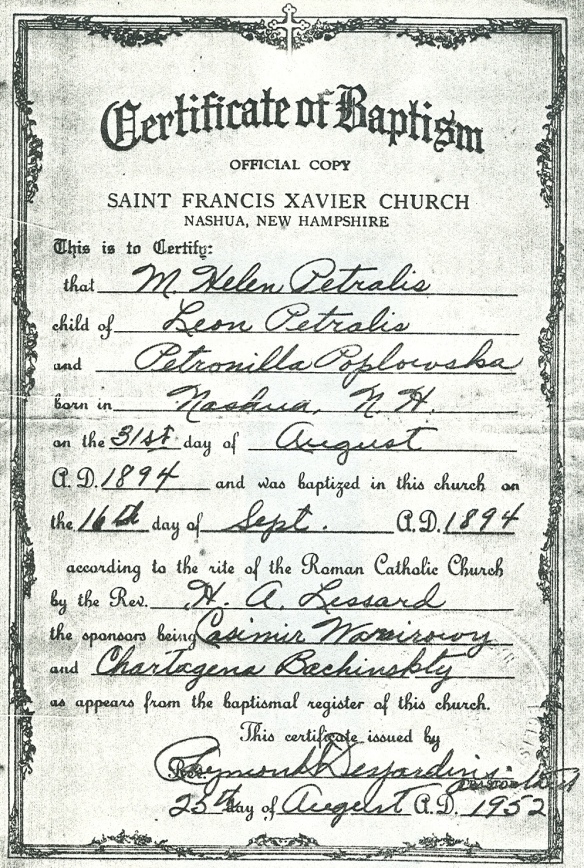 This Greenfield, New Hampshire birth record has no first name listed for the child, but lists Wilno, Poland as the birthplace of Leon and Petrusia. This is the same date as Helen’s birth, 31 Aug 1894 and most of the details match the Massachusetts Birth Record below.

On this Massachusetts Birth Record for Helen, it lists her first name as “Lena”, place of birth as Greenfield, NH and says the parents (Leon and Bertha? Petralis) live at 104 Garden St in Lawrence, MA.

The family lore about Leon’s death was that he was killed in an accident with a runaway horse when his daughter Helen was just 2 years old. These two records certainly are about the same person, but I’m not sure if it’s my Leon. The date of this Leon’s death, 19 Feb 1896, fits with both the family story and the birth of Helen’s half-sister Mae in 1898.

This Leon is the right age, is married and is from Russia. The mother’s first name is the same as the marriage record (Mary) but the father’s is different: Michael here, Mathew on the marriage record. Of course, Leon wouldn’t have been the one providing the information for the death record, so an inconsistency is not surprising. He died of Typhoid Fever and Peritonitis.

Leon does not appear in any other city directories that I can find and his widow is not listed in any later Worcester, Massachusetts directory. In fact, if this is my Leon, these would be the only records that I’ve found that show him in Worcester.

Nashua, Lawrence and Worcester are not all that far apart and as a laborer he likely just went wherever the work was. Also, all 3 cities had strong Lithuanian/Russian communities at the time. If this is Leon, then his mother’s last name is possibly Balcute, which would be a new name to me and another line of possible investigation.

I’m hoping I have a cousin from the old country that knows all about “Cousin Leon that went to America”, are you out there?

This post is 30th in the 52 Ancestors in 52 Weeks challenge series.