Newspapers are one of my favorite sources, where else can you get stories like the one below? This particular article comes from the January 5th, 1895 edition of “The Press” from New York, NY and features my 3rd great-grandfather Reuben Odell. I found it on the Old Fulton NY Post Cards website.

Frank W. Drake tried to abduct his infant child on Thursday. The child and her older sister were in the oyster saloon of Reuben Odell, at 55 Bleecker street, Newark. Odell is Drake’s father-in-law. Mrs. Drake left her husband a week ago, his treatment of her having become unbearable. Thursday she went back to her husband’s home on Pine Street, South Orange, to remonstrate with him.
During her absence he went to her father’s place. There were hot words between Drake and his father-in-law. Then there was a fight, and Drake was hurled to the sidewalk, bruised and bleeding. By and by he came back again. Odell was in a back room.
Drake saw his little girl sitting on her grandmother’s lap and asked the woman to let him kiss the child. He pleaded with tears in his eyes, and finally the little one was placed in his arms. Then he bolted out of the door and sped away down Washington street. Odell gave chase, Drake dodged into Mullin’s morgue and hid behind a coffin. Odell followed him in.
“Give me the child.” he said.
Drake hesitated a moment, and then placed the infant in its grandfather’s arms. Then he darted out of the morgue and made good his escape.

Mrs. Drake is Martha Odell, sister of Susan Odell Frost. The story does have a happy ending as far as I’m aware, Martha and Frank did reconcile and had four more children.

This post is 16th in the 52 Ancestors in 52 Weeks challenge series.

93 years ago today [19 April], my 2nd great-grandmother Susan Carolyn (Odell) Frost passed away at the age of 62. I’m fortunate to have a few pictures of her, including this one taken around 1919 in Newark, New Jersey with two of her children and her granddaughter.

She is buried in the family plot in the Fairmont Cemetery in Newark. Which I understand is now in a “not so nice” area, but I’d still try to visit next time I’m in New Jersey. 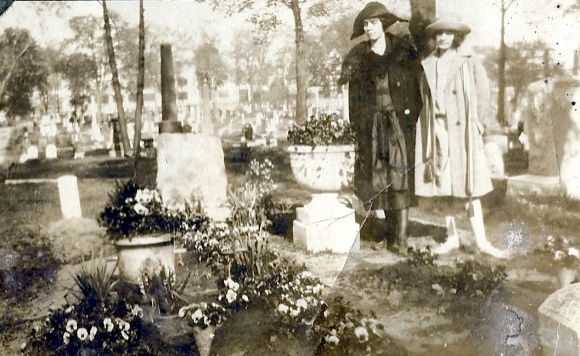 A cousin sent me the records from the cemetery, which includes the names, ages and dates of death of the 22! family members buried in the plot, including Susan’s parents, grandparents, various aunts, uncles and cousins. Truly a genealogical goldmine of information.

Susan Carolyn Odell was born 24 April 1858 in New Jersey to Reuben and Martha (Cole) Odell, she was the eldest of their seven children. In June of 1880, she married Julius Henry Frost, a young entrepreneur that had started a Barber Supply business with his brother Frederick.

This post is 15th in the 52 Ancestors in 52 Weeks challenge series.

This week, I’d like to say Happy Birthday and remember a wonderful woman, Sandra Davis.

When I moved to Haverhill, MA in 2001, I knew that my Lucey’s had lived across the Merrimack River in Groveland in the 1860’s, it was what drew me to the area in the first place. What I didn’t know, was that my 2nd great-grandfather James had a brother David that stayed in the area after James left for Rochester, NH in 1879.

David Lucey (1857-1904) lived on Temple St with his wife Jean (Brodie) and their daughter Lucille [yes, Lucy Lucey].  He was a real estate investor and owned a bar/restaurant in Washington Square in downtown Haverhill. It was such a pleasant surprise to find out about this “lost” [to me anyway] branch of the family.

Later in 2001, I found a forum post on a local website looking for information on relatives of Lucille. A woman named Sandra Davis from Texas said she was a descendant of Lucille and Harold Smith. How exciting! A real, long-lost cousin!

Sandra, a 3rd generation only child on her Lucey line, had been looking for information on this part of her family for a number of years and fortunately, my grandfather’s sisters Betty and Joan were still around and knew Sandra’s father and grandmother. They exchanged letters and in 2002 we held a family reunion at our house and Sandra attended as the guest of honor.

We kept in touch over the ensuing years and when we moved to North Carolina, Sandra and her husband Ted came from Texas to visit their son Russell and his family who live in the same area and we visited with them. And while I haven’t met her other children, we keep in touch via social media and I’m sure will meet at some point.

Unfortunately, Sandra passed away in 2011.

In her emails to me, she would often thank me for giving her a connection to this part of her history that she never knew, but I’m the one that’s thankful. Not only was she wonderful to me, my wife and my children; she was the catalyst for having that family reunion which was the last time my grandfather’s sisters and my grandmother were together, three short years later they were all gone. We also have a great relationship with Russell and his family. Russell and I share a love of beer and music, it’s in the genes I’m sure.

So thank you Sandra and Happy Birthday, you are missed.

This post is 14th in the 52 Ancestors in 52 Weeks challenge series.