It was tempting to call this post Mustache Monday, because James’ mustache is phenomenal!

James enlisted 4 Dec 1863 for 3 years, at the time he was 16 years old (18 on the paperwork). He was the drummer boy for the Company M of the 2nd Massachusetts Heavy Artillery regiment. Company M was mustered into service on Christmas Eve, 1863. On 8 Jan 1864, under the command of Captain Jere A Greeley,  they left for the regimental headquarters in Norfolk, Virginia.

Co. M was in Norfolk and Portsmouth, VA until May 1864, then moved to New Bern, NC, Kinston, NC and Smithville, NC until Sept 1865 at which time they were sent home to Boston. At Gallups Island on 23 Sep 1865 they were mustered out. The regiment lost a total of 382 men, 363 to disease. There was a yellow fever epidemic in New Bern during the fall of 1864, which killed about 175 men.

From James’ military service and pension records (ordered from the National Archives), I’ve learned quite a bit. For example, Regimental Muster Rolls show some interesting details of what James was doing and/or breaking:

From James Pension applications, there is a wealth of information. This is how I learned about his first wife, Mary Crotty, who, along with son James, died in childbirth in 1868. James and his family lived next door to the Crotty’s in Groveland, MA in the 1865 census. Mary’s brother Edward Crotty remained good friends with James, as he moved to Rochester, NH around the same time and was godfather to James’ daughter Cecelia.

The pension application also shows where James lived prior to enlistment (he listed Amesbury, which I’m not sure about but missed Andover.) It also lists all places lived since discharge and provides a physical description, 5’8″, 165 lbs, blue eyes, gray hair and a dark complexion.

James was very proud of his service to America and was a member of the Grand Army of the Republic (G.A.R.) for many years and participated in many parades and ceremonies in Rochester, NH. He also prominently displayed his honorable discharge papers and this beautiful “Soldiers Memorial”. 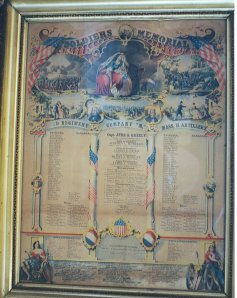 Dave, that is some fantastic research, thanks for sharing. I really enjoy the Civil War era and any stories from that period just pull me right in. Great work!

Thanks Tom, I appreciate your comments. CW is my favorite era as well. I need to visit some of these locations in NC, I don’t live that far from them!

[…] 3rd great-grandfather James E. Lucey was very proud of his Civil War service. He joined the Grand Army of the Republic in Rochester, NH and participated in parades and other […]