David Joseph Lucey (my 2nd great-grand uncle, brother of James) was just 47 when he died in Dec 1904, leaving his wife Jean (Brodie) and daughter Lucille. 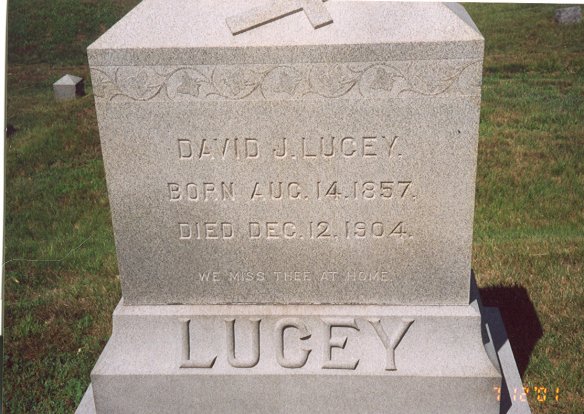 This cemetery plot was owned by Jean’s father, Peter Brodie and he, along with his wife Mary, son Robert, daughter Jean, Jean and David’s children Arthur and Lucille are all buried here. This death notice appeared in the Haverhill Evening Gazette on 12 Dec 1904. 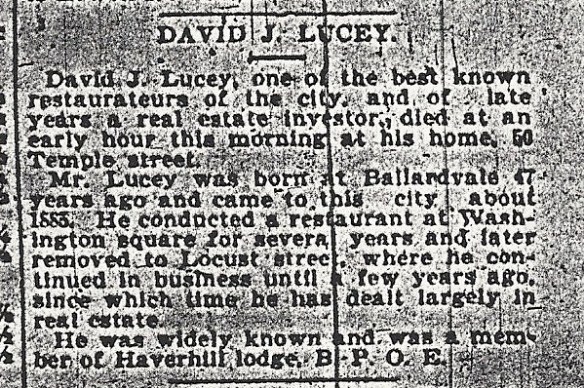 On 14 Dec 1904, the following obituary was published in the Haverhill Evening Gazette:

The funeral of the late David J. Lucey was held this morning from St. James church, requiem mass being celebrated by Rev. Fr. Graham. The services were attended by a large number of friends of Mr. Lucey, including a delegation from Haverhill Lodge of Elks, of which he was a member. Many businessmen, who had business dealings with the deceased, were also there to pay their last respects to the memory of one of their number. The floral tributes were profuse and were silent testimonials of love and esteem.

At the conclusion of the services the remains were borne to St. James cemetery [he was actually buried in Riverview, not St. James, not sure if he was reinterred], the bearers being Dr. W.F.B. Reilly, Edward F. Sullivan and Thomas H. McDonald from Haverhill lodge, B.P.O.E.; John Lucey of Groveland, James Lucey of Groveland and John Fielding of this city, nephews of the deceased. 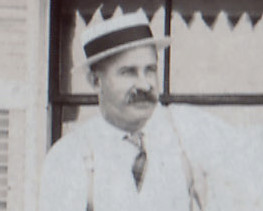 3 thoughts on “Tombstone Tuesday – We Miss Thee At Home”