In the Boston area, going to visit the U.S.S. Constitution in Charlestown is a right of passage for every kid. Two hundred years ago today, America declared war on Britain and the Constitution would earn its nickname “Old Ironsides” in the ensuing naval battles. The War of 1812 is sometimes called the “forgotten war”, overshadowed by the American Revolution and the Civil War. But, it was an important step for America, to prove to Britain and the world that it could stand up on its own.

My 4th Great-grandfather Rodolphus Stanhope enlisted at Robbinstown, Maine as a Private in Capt. Thomas Vose Jr.’s Militia, Lieutenant Colonel Oliver Shead’s Regiment.1 He was 15 years old at the time. I can’t find any record of engagements for this unit, so I don’t believe he saw any fighting. He does show up in the War of 1812 Pension Application Index on Ancestry.com. The actual Pension files are being digitized (you can support the cause here) and will be available on Fold3 as they are completed. I will probably order the records from the National Archives this summer. 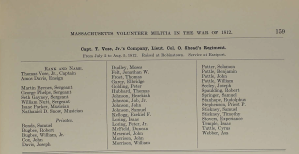 Rodolphus (1796-1870) was the son of Peter and Elizabeth (Parmenter) Stanhope. He married Susannah Hickey in 1815 and they had 13 children including my 3rd great-grandfather, Rodolphus in 1817.

Hi Dave,
I have some information on the Stanhope family as my Great-Great-Grandmother was Cordelia Ann Stanhope (d/o RUdolphus Stanhope & Charlotte Leighton). RUdolphus was the son of Rodolphus S. Stanhope and Susannah Hickey.
~ Sharon Hanson, CrossbowGR@aol.com Southern California

Hi Cousin!
thanks for stopping by and commenting. I’ll send you an email, happy to share whatever info I have as well.
thanks
Dave