Back in April 2012 I received my AncestryDNA results and wrote about my surprise at seeing Scandinavian and Persian/Turkish/Caucasus in my Genetic Ethnicity results. I’ve had some recent results that possibly shed some light on both question marks in my, and hopefully others, genetic ethnicity as AncestryDNA sees it.

At the time of my DNA test, the most popular theory was that the Vikings were lovers as well as fighters and that most of my Irish/English heritage is shown as Scandinavian. Back in August I connected with a cousin from my Stanhope line (Hi Susan!) and she pointed me to the website of Michael Stanhope, which seems to support that theory.

Michael, with the disclaimer that the information is“…what might have been rather than what definitely was”, documents the Stanhope line back to “…Halfdan Olafsson, Jarl of Vestfold, Ringerike, Hadeland, and the Opplands.” around the year 700 in Norway. The line supposedly goes from Norway to Normandy to England to America. That could certainly account for some of my Scandinavian ethnicity but it’s all but unprovable from a genealogical perspective. I was hopeful for something more concrete.

My Irish/English and Stanhope ancestry is on my paternal side, so every time I saw someone with Scandinavian listed as our “Shared Ethnicity” on Ancestry DNA, I automatically looked for surnames and locations from that side of my tree. Turns out I was being shortsighted.

My maternal grandfather’s parents are German and Lithuanian and although my grandfather is no longer here, his wonderful sister Jane is. My great-aunt Jane took the DNA test in December and yet another surprise when her results came in: 64% Eastern European, 36% Scandinavian. 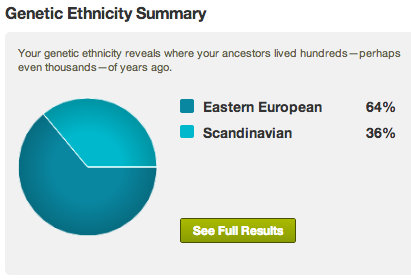 When I look at the matches we have in common, it turns out that on many of them the Shared Ethnicity is Scandinavian and the Shared Birth Location is Germany.

Most of the matches have no obvious Scandinavian heritage (surnames or birth locations). Some matches have Central European ethnicity as well, which is where you’d expect German heritage to show.

So, it seems that some German ancestry shows as Scandinavian in the Ancestry DNA system. Perhaps these people originally were from Scandinavia and the test is picking up that deep ancestry or perhaps it’s just an error in the way the system works.  Any readers with Scandinavian in your DNA results where you expected German?

My maternal grandmothers parents are both from Quindici, Avellino, Italy, which is a small town near Naples. You’d expect them to show as Southern European in my ethnicity, but I don’t have any.  I recently found a DNA match where the persons grandmother was a Manzi and our only shared ethnicity is Persian/Turkish/Caucasus.

Legend has it that my Fusco’s from Malden, Massachusetts are cousins of the Manzi’s from Lawrence, Massachusetts but I have not been able to find documentation of the connection yet. I’ve sent a message to the match to see if we can find a connection, I’m hopeful we will.

Are you seeing a similar or contrary pattern in your AncestryDNA results? I’d love to hear about it, please leave a comment.